A WELCOME FROM THE HEADTEACHER

I am delighted to welcome you to Ysgol Llanfairpwll's website.

The school has a happy and industrious atmosphere where everyone is treated as an individual, and is known and valued by everyone else at the school.

The school’s pleasant environment offers many opportunities for field study work which can only enhance the children’s curricular experiences. A nature reserve has been set up at the school together with an allotment area with ten raised beds for planting. In 2014 the school constructed an adventure play area and story telling area. Each of these contributes to the educational development of the children. The addition of the Llanfair Pwllgwyngyll Play and Learn Association building at the school has proved a great success, resulting in closer links being formed between the school, the pre-­‐school children and the local community.

The governors and parents show a valued commitment towards the school, both in terms of policy support and in fund raising.

At Ysgol Llanfair Pwllgwyngyll we provide a safe, happy and well ordered environment in which children can develop respect for others, responsible attitudes, self-­‐discipline, good work habits, respect for the environment and pride in their work and achievements.

We ask you as parents to support the school in developing these attitudes by making sure that your child arrives at school punctually; behaves in a proper manner at all times; is encouraged to respect other people’s property including that of the school; that school is informed in writing/phone if your child cannot attend for any reason or is late.

It is important that you show a regular interest in what your child does in school. You will have an opportunity to visit the school to discuss your child’s development. Our aim is to create a caring and purposeful community of which we can all be proud.

I am always prepared to show new or prospective parents and their children around the school. Please telephone or call to arrange a visit to meet myself, the staff and to see the classrooms. We look forward to meeting you. 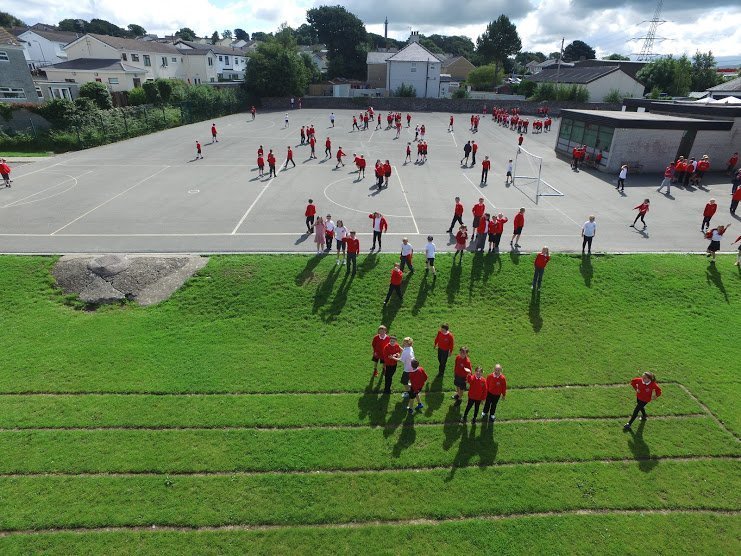 HISTORY OF THE SCHOOL

The first day school in this area was the Duchess of Kent School. This church school was built on land close to Tyddyn Pwyth, about a half a mile outside the village. As the name indicates, it was the Duchess of Kent, the mother of Queen Victoria, who donated the £30 that was required to build the school. This purpose of this school was to educate the children of the parishes of Llanfair Pwllgwyngyll, Llanedwen, Llanidan and Llanddaniel. The school closed in 1872. Very few of the children of this area in reality were given the opportunity to aYend this school.

As a result of Forster’s Educa[on Act of 1870, the government decided that more schools were required, in order to educate every child in the country. However, this caused great a disagreement in the village. Church and Chapel leaders were unable to agree on how to move forward, and therefore, two new schools were built.

By the early 1950’s the numbers of pupils in both schools had declined, and the County Council decided that by now, one school was adequate for the needs of the village. In December 1953, the National (Upper) School, closed its doors, and in January 1954, all of the village children were educated for the first time, under one roof.